What better way to honour this week than by attending The Engineering College awards evening, where our very own marine engineer apprentice, Jack Bendrey, won the Foundation Stage Apprentice award. A well deserved recognition for Jack, who has not only excelled at his course but also become involved in all areas of National Marine, including safety boats, surveys and the supply of pontoons, alongside using his marine engineer skills in our workshop.

"We are immensely proud of Jack for all his hard work and the commitment he has shown to the company. Jack was the first apprentice that we have taken on, and now because of his shining example we have taken on two more trainees. As a company we think it is important to help shape the younger generations, not just for the future of our company but for the industry as a whole. We are proud of our commitment and the training we offer all our employees, and Jack's success has cemented our belief in our apprentice program."

In September, Connor Watson joined Jack as an apprentice engineer and we have recently created a new role of trainee crew, which has seen Tom Henderson also join the National Marine team. We hope to continue to help young people in The Wirral as more opportunities become available on our apprentice program.

Raising the standards of our industry 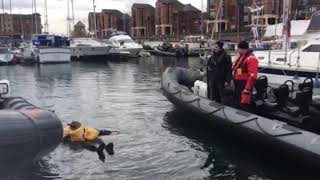 The Frog gets delivered back to Bam with a brand new Suzuki 90hp fitted.